Slightly cooler weather hit Wednesday morning in the central Gorge bringing with it big winds for the second section of the first annual Hood River Slider Jam. Delivering not only strong but also variable conditions to the Columbia River corridor, in turn adding an extra element of difficulty to the ‘Line Section’ portion of the event. In this segment, riders would be rewarded for consecutive high scoring hits on each park feature in one cohesive ‘run’ through the park. 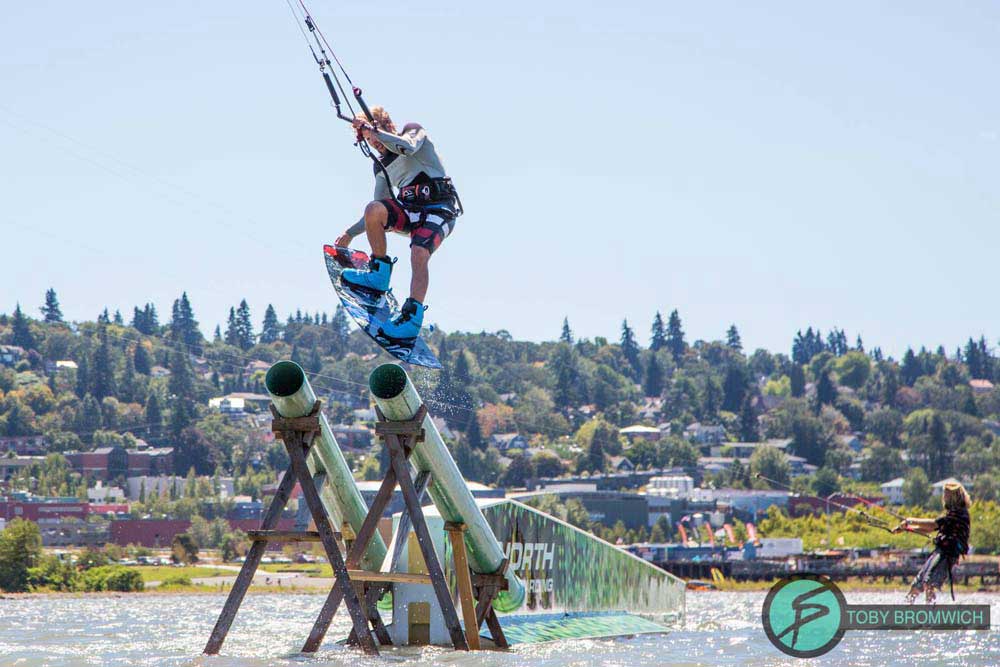 One by one, each rider will be given the opportunity to place their best score on each feature for a possible total of 30 points (10 maximum points on each; North Up-Down Rail, North Cheesewedge, Slingshot Kicker right foot). Different from most kiteboarding competitions, the judging will be done after the day’s competition has been concluded. Scores will be determined at a video viewing where riders will all judge each other by giving an overall impression score for each maneuver with only the highest total line score counting. 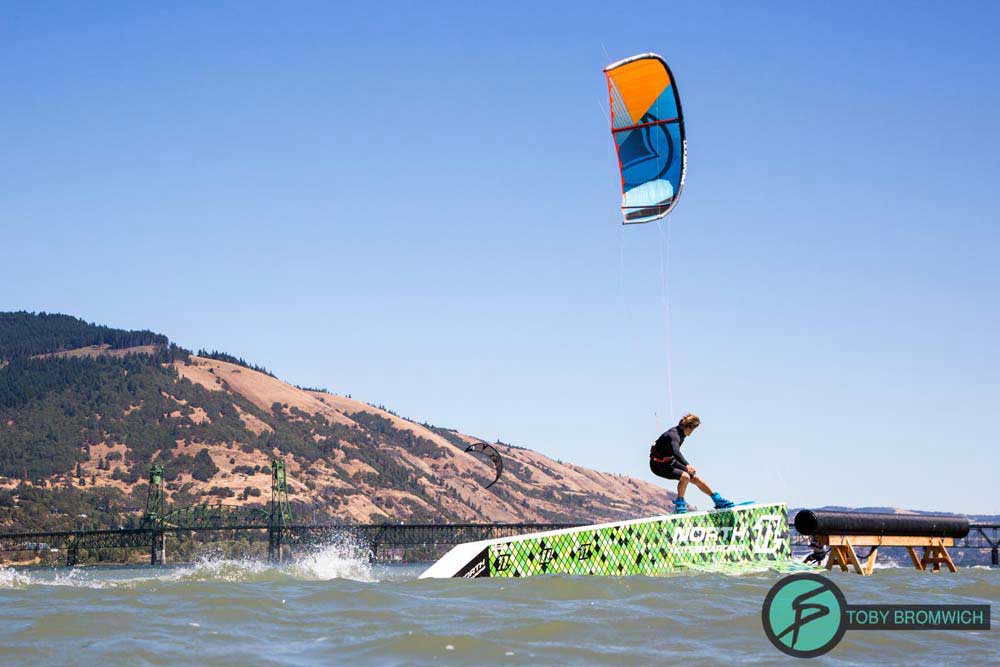 It is important to note that if a rider falls on any of the three features, he or she is not allowed to continue to the next feature and their score will be made up of only the tricks landed. During this section of the event, consistency is highly rewarded as success will be given to the riders who can complete high level tricks on all three features in one uninterrupted run.

As the event carried on, riders found that while this format was likely the most fun part of the event yet, it was much more difficult than initially realized. Unlike the relatively friendly winds of the day before, the strong gusts and lulls made it increasingly difficult to accomplish three high scoring hits on one pass through the park. 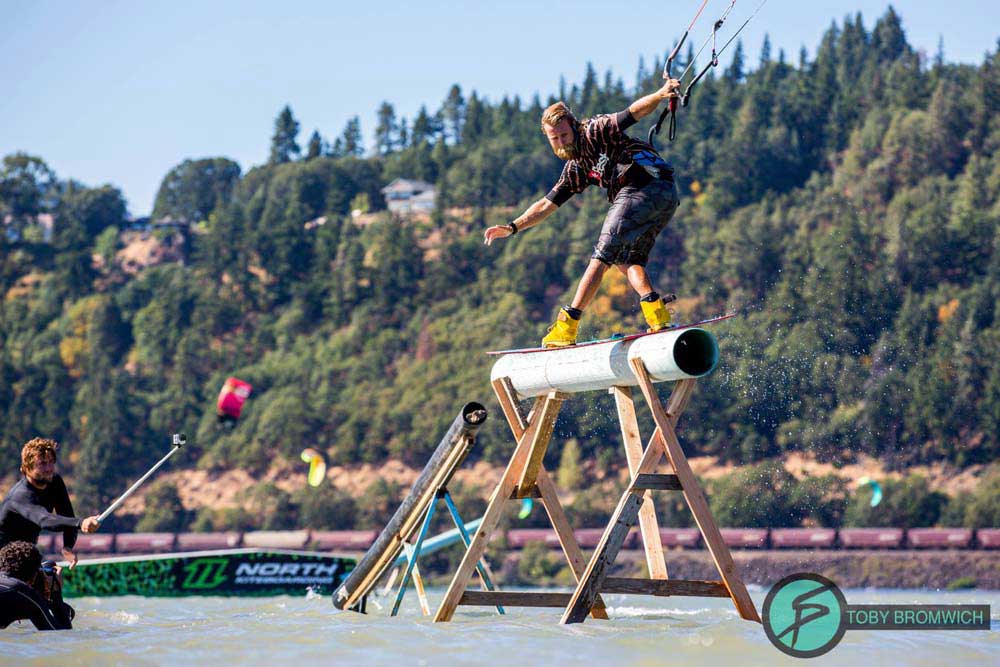 Even with the added difficulty of the days weather conditions, riders managed to throw down insane runs, linking technical and stylish rail hits just before landing impressive moves off the kicker. Standouts from the day were local hero Brandon Scheid and Canada’s Sam Medysky who both held down solid combinations of tricks to make what will likely be high scoring runs.

To conclude the first annual Hood River Slider Jam, the Slider Project park was fitted with the new obstacles built earlier in the week.  In true grass roots fashion, all participants met early in the day to put the new park features in place.

After an efficient couple of hours spent hauling obstacles and fixing them in their designated locales, the park was looking good and was ready to be sessioned.  Now with three new features in the park, each more technical than anything ridden in the competition up until this point, riders would be given three opportunities on each feature to place their one best score.

To start the competition for the day, riders sessioned the friendliest of the three new setups, the cheese wedge to flat corrugated tube.  Proving to be a fun and relatively easy obstacle to hit, many of the riders landed technical and stylish hits with varying combinations of presses, passes and spins onto/off of the feature.

The second feature to be sessioned for the day was intended to be the up-down to up shotgun however, during the last minutes of warm up the downwind tube was broken when rider, Craig Cunningham hit it at full speed.  Then deemed beyond repair, the North Up-Down was instead fitted with the flat corrugated as a step up off the end of the slider.

The third feature incorporated into the day’s competition was the refurbished black up pole otherwise known as “Joby’s Pole” which was paired with the large smooth flat tube and arranged with a large gap in between the two features.  Easily one of the most technical and risky features to ride of the entire event, it required the highest level of riding to complete what would be a high scoring hit.

It was easy to see which riders where accustomed to hitting this style of technical ‘backyard’ obstacles as it was no problem for them to still land stylish and advanced maneuvers despite the added difficulty.  Notable mentions of the day go out to Craig Cunningham, Brandon Scheid, Sam Medysky and Sam Light who will be sure to receive high scores from their peers during judging.

Another standout from the day was Aymeric Martin who has been turning heads in the competition from day 1.  A newcomer to the kiteboarding park scene, Aymeric’s riding level has been quickly on the rise possibly due in part to his all in mentality and determination. Taking a bad crash during warm ups on the up to flat tube leaving him bleeding and bruised but generally okay, he stayed in it until the end claiming some nice hits and also painful diggers.

Riders gathered to judge the Line and Build sections of the event and in the end crowned Brandon Scheid as the first annual Hood River Slider Jam Champion. Brandon gave a solid performance throughout the entire event placing high scores for each the Tech, Line and Build portions.

Also putting on a good show where Sam Light and Sam Medysky who came in close behind Brandon to take home the second and third place wins. 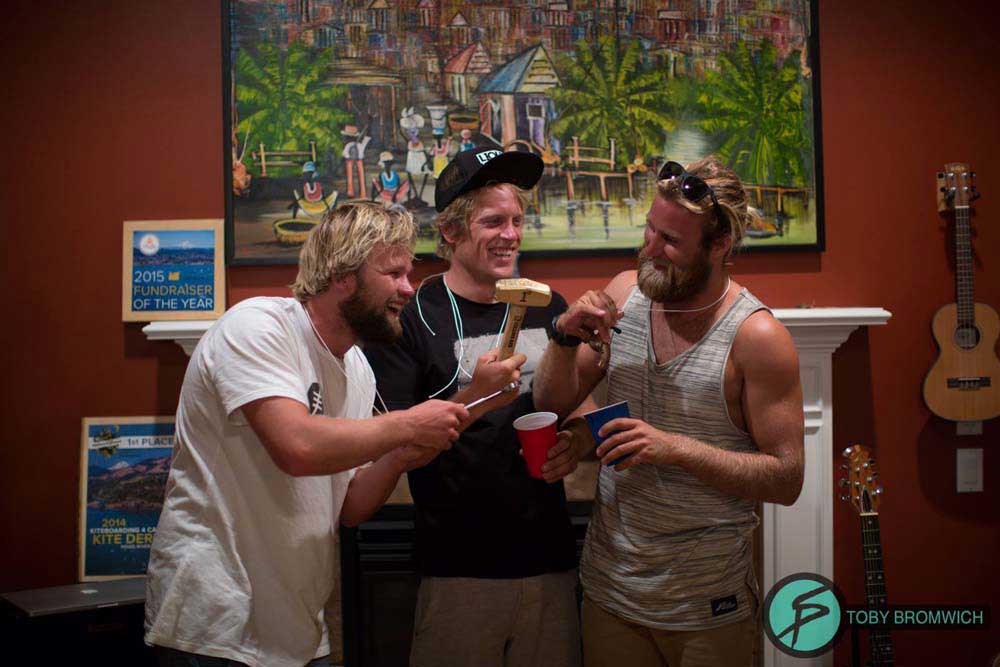 Event organizers Rich Sabo, Brandon Scheid, Craig Cunningham and Colleen Carroll are already making plans to host next year’s Hood River Slider Jam that is sure to be of much more epic proportions. Keep an eye out for ways to participate, sponsor or spectate. 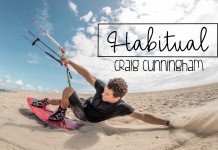 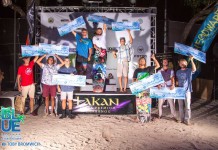 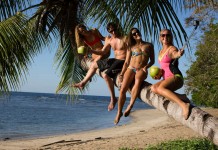