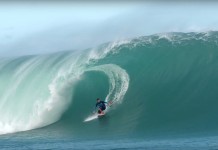 Watch the best Kitesurf session ever @ Teahupoo 2013. Mitu Monteiro, and Tamatoa Torea surf Hava’e while Robert Teriiteau tries to get a tube on jetski.

Teahupoo is recognized worldwide for its impressive waves, and is well known amongst the extreme surfers who dare to surf it. Very few Kite surfers have tried to surf Hava’e in tow-in’s conditions, however on June 1, two kite surfers from Moorea, Tamatoa and Torea are on the spot.

On June 2, it’s one of the best kite surfer nowadays, Mitu Monteiro, who wants his dose of adrenaline, as well as some of the local kite surfers. In the same time, Robert Teriiteau tried to catch a tube in jetski. To date, the session of June 2, 2013 is undoubtedly the most crazy in the history of kite surfing in Tahiti.

XTreme Video features awesome extreme sports all over the world!