An early call was made for the rider’s meeting at 9:30am, as the forecast was looking optimistic for the day ahead, and there was a challenge to be able to complete both the freestyle and the big air competitions in only a few hours. As the riders set up their gear, the wind started teasing by continually dropping off and then picking up again. 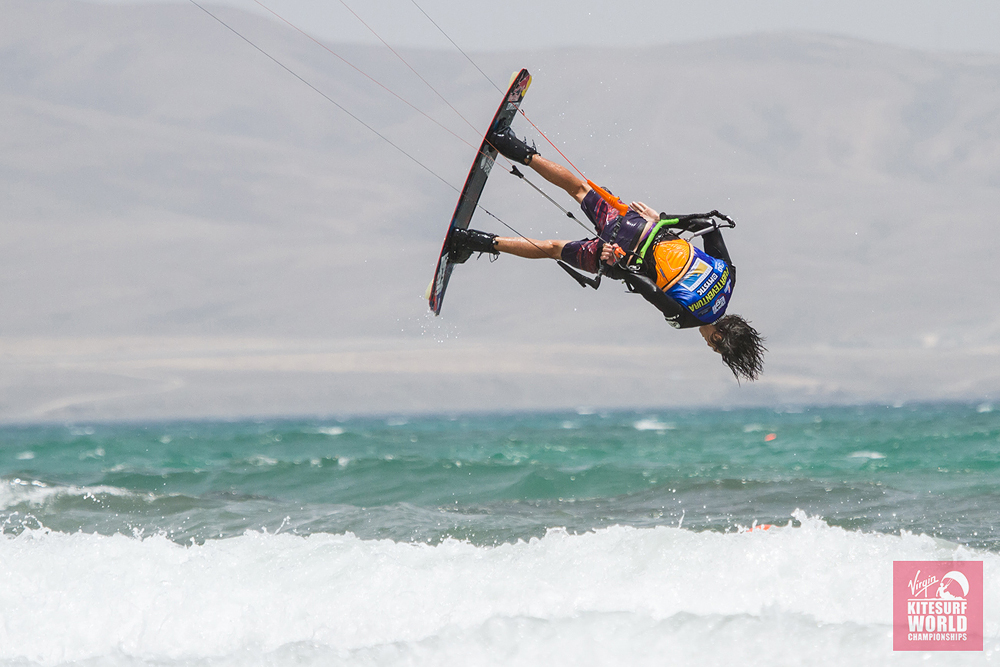 By 12pm, the winds appeared to be consistent enough to run the first heat with Paul Serin (FR/Naish) vs Carlos Mario(BR/Slingshot). The guys were on 14 metre kites, and the wind was blowing an estimated 16 knots. Carlos Mario started strong with a powerful Back Mobe. Serin managed to get a strong start also by throwing down a nice KGB and Back Mobe. Mario did an impressive Heart Attack 5 in the last second which gave him the win and passed him through to the semi finals. As the heat drew to a close, Mario went to high 5 his friend Serin, a demonstration of the good vibes and positive attitude that these guys maintain both on and off the water.

Heat number 28 got underway with the conditions improving considerably. Aaron Hadlow (GB/North) opened well with a fierce Front Blind Mobe and Back Mobe 5. David Tonijuan did not fail to impress either, putting together the same moves as Aaron, but with more height and power. Unfortunately, Aaron struggled to land his backside 315, crashed his kite and tangled his lines. Tonijuan seized the opportunity and was on fire during his heat, enabling him to defeat the British rider and pass through to the Semi-Finals.

Men’s heat 29 was an action packed 8 minutes with 1x World Champion Alex Pastor (ES/Airush) up against Current World Champion Christophe Tack (BE/Liquid Force). Pastor entered the water showing great confidence with his riding, landing a Front Blind Mobe and Back Mobe 5 and an impressive Double Heart Attack in the first few minutes. Tack was not willing to be defeated, and retalliated with a nice Fronside 7 and Backside 315, to eventually take the win and head straight for the finals.

Joining him in the final was the 17 year old Carlos Mario (BR/Slingshot), who landed an incredible S-Mobe 7 being the highest scoring trick of the competition, and defeated Spanish rider David Tonijuan (ES/Cabrinha), who did amongst other tricks an impressive Backside 315 but it wasn’t quite enough to beat the Brazilian Mario.

For the girls, Annabel Van Westerop (AUA/Cabrinha) went head to head against Gisela Pulido (ES/Best) Riding her 9m kite, Annabel opened up landing a very clean S-Bend to Blind. Gisela changed her kite and opted for 11m, landing a powered Back to Blind, S-Mobe and a Blind Judge. Both riders showed incredible aptitude and determination, but eventually it was Pulido who advanced.

To see who else would gain a place in the final, it was time for Brazilian Bruna Kajiya (BR/Airush) to face Paula Novotna(CZ/North). Both riders have been competing well at recent events, but it was the more experienced Kajiya who pulled of an impressive Back to Blind and 313, and passed through to face Gisela Pulido in the final. 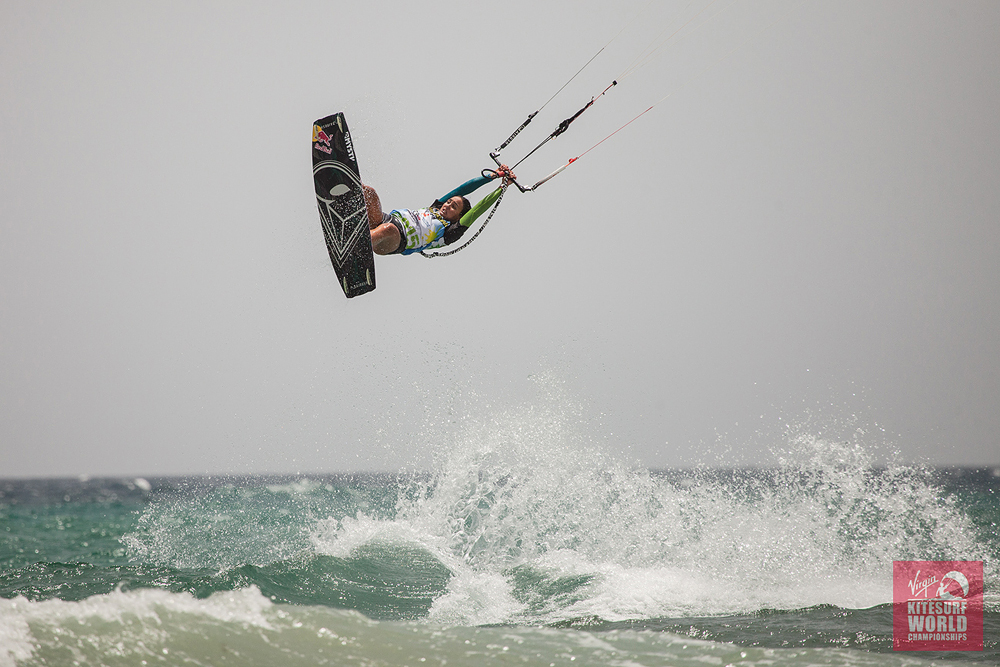 For the Women’s final, an impressive heat was run between 9x World Champion Gisela Pulido and 1x World Champion Bruna Kajiya. The heated battle commenced with an outstanding Heart Attack and Slim 5 from Gisela, which was matched with an S-bend to Blind and S-Mobe from Bruna. Eventually it was the Brazilian rider’s perseverence and consistancy that gave her the win. Bruna was thrilled with her first event win of the year. Gisela took 2nd place, with Annabel Van Westerop in 3rd and Paula Novotna in 4th. All the girls put on an amazing show today, and gave their best performance in front of the Sotavento crowds.

Bruna Kajiya – “I’m so happy, it’s incredible! Im happy that I did a really good heat and Gisela also. This is important because it made it more exciting for both of us. I just went for it, I risked a lot. I went for big tricks, and in the end it was worth it, and im extremely happy. ”

There were several attempts to run the Men’s Final and mini final, but the wind was just not playing ball, so by 5pm the event was over, placing Christophe Tack and Carlos Mario in joint 1st place, and Alex Pastor with David Tonijuan in joint 3rd place.
It was unfortunately not possible to finish the Big Air elimination due to the light wind conditions.

Christophe Tack – “I was lucky to have some great wind for 12 metres, and had a good heat against Alex. I was stoked to be able to find some kicker tricks, I pulled a heelside frontside 720 and toeside backside 540. In the final I started well against Bebe with a backside 317 and managed a KGB 5 and heelside frontside 720, but unfortunately the wind dropped and the heat got cancelled. Bebe was ripping so I’m stoked to share first place with him!”

It’s been an outstanding week of action here on Fuerteventura, with wind conditions being more varied than previous years. As always, the beaches have filled with spectators and supporters who came to cheer on the World’s elite kiteboarders. Thanks to all who came, riders, spectators and organizers, for a wonderful effort and succesful event. Next up is the VKWC in St Peter Ording, which will be commencing on 21st of August… see you all there! 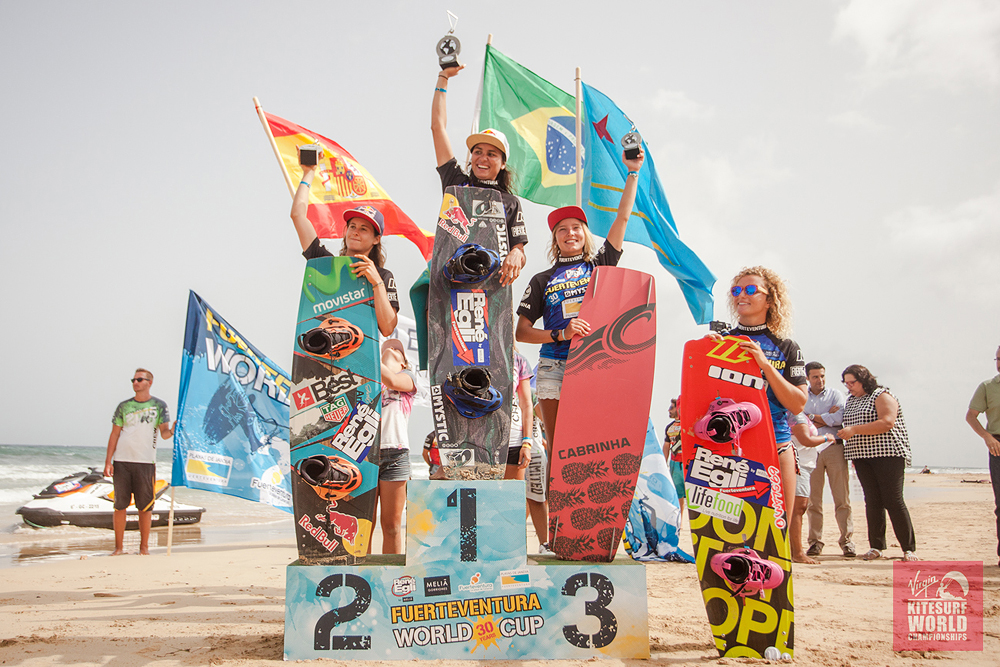 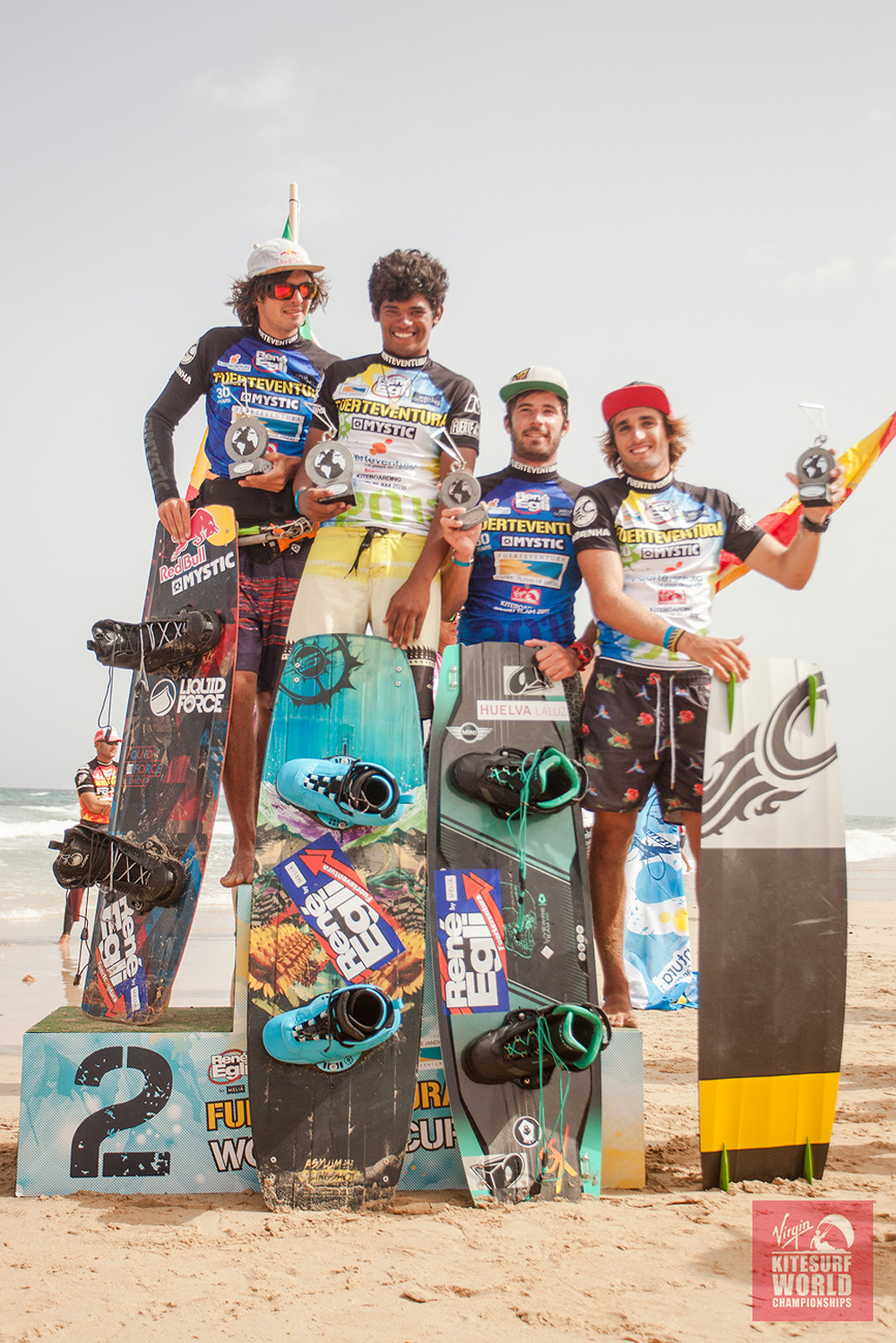 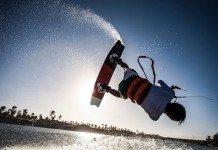 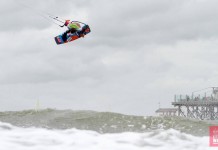 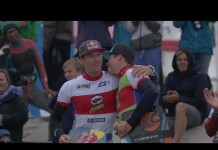