“Cape Town, stop showing off!” is exactly what the commentator said during the Red Bull King of the air on Sunday 7th February 2016. The event started at 2pm, precisely on time, at Big Bay, Cape Town. And showing off, is exactly what Cape Town did! The wind reached speeds of over 35 knots, the waves were peaking at enormous heights and the crowds and cheers were larger than ever before. 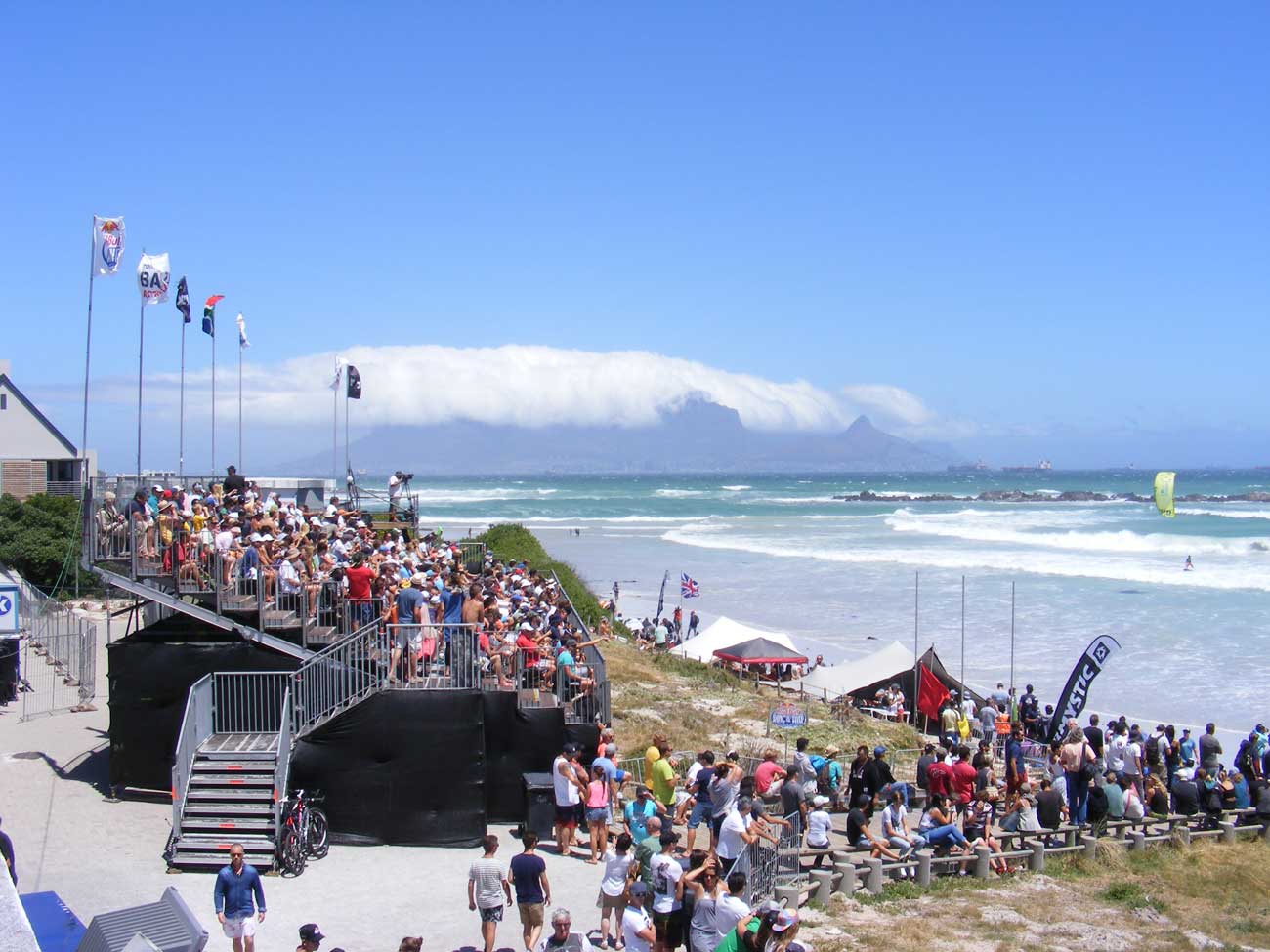 Heat after heat, the spectators saw things they had never seen before. Each jump was higher than the one before it. The electricity of the crowd’s cheers was building too as the day progressed. Things like Tom Hebert’s quirky old school moves and Sam Lights’ megaloop triple back roll had the crowd in screams. Reno Romeu also stood out as one of the crowd’s favourites with the height he reached in all his tricks. Then there were things that had the crowds in screams for not so good reasons; like when Oswald Smith fell down in the shallow water after a spectacular handle pass gone wrong. The lifeguards rushed to his side but he soon had the crowd cheering when he stood up and walked away unscathed. Lasse Walker also had a frightening crash at the end of his heat. Everyone realised there was something wrong when he stayed underwater and did not try to relaunch his kite. Kevin Langeree came to his rescue long before the rescue boat could reach him, and held him up out of the water so he could breath. Happily, he came out of the ocean with no broken bones and just some water on his lungs. The last accident of the day was had by Lewis Crathern during the last semi-finals. The competition was immediately put on hold so they could rescue him from the water. We are not exactly sure how he is doing but we do know that he released his kite the second he fell in the water, which was a very wise thing to do and which made it easier to rescue him. We also know that he had a rather bad fall by the height that he fell from. There was about an hour and a half break after that before the semi-final could resume, as they had to wait for the ambulance to return. 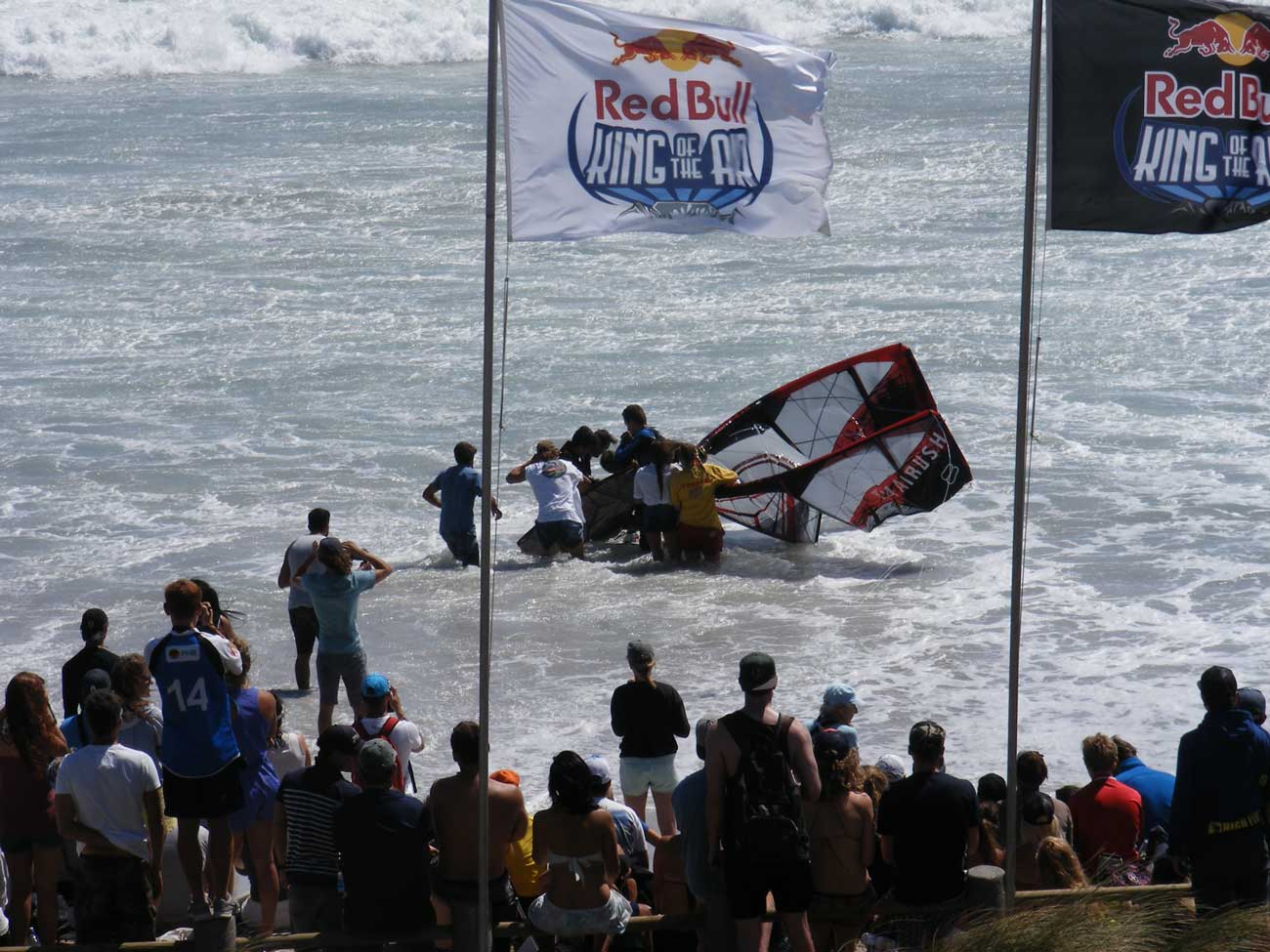 During the break, we spoke to the media commentator, Colin Heckroodt, for an update:

It’s been an incredible event, the judges up there in the box and the riders and visitors from overseas have been saying that it is border lining on being the best King of the Air event they have ever seen. We’ve had the most accidents so far, it’s been the most risk taking so far, and the guys have already been pushing the limits in the first and second rounds – it’s unheard of, it’s amazing. So far I don’t think any WOO records have been broken, the wind isn’t quite up to 40knots like they had before when they broke the records. But we’ve seen some serious moves going down at about 18 and 19m with rotations and maybe a loop or two. So it’s definitely a record in terms of tricks that have been done with height.

The final was one for the record books. Jesse Richman did his first trick just seconds after the starting horn blew and Aaron Hadlow followed shortly with his perfectly executed megaloop KGB. Kevin Langeree also wowed the crowds with his high board-offs and smooth landings. By this time it was 7pm and the wind was only gusting up to 28 knots. But despite the long day, the setting sun burning their eyes and the dropped off wind and waves, these guys came to the party like never before. It was anyone’s game at this stage as each competitor brought their best to the water. 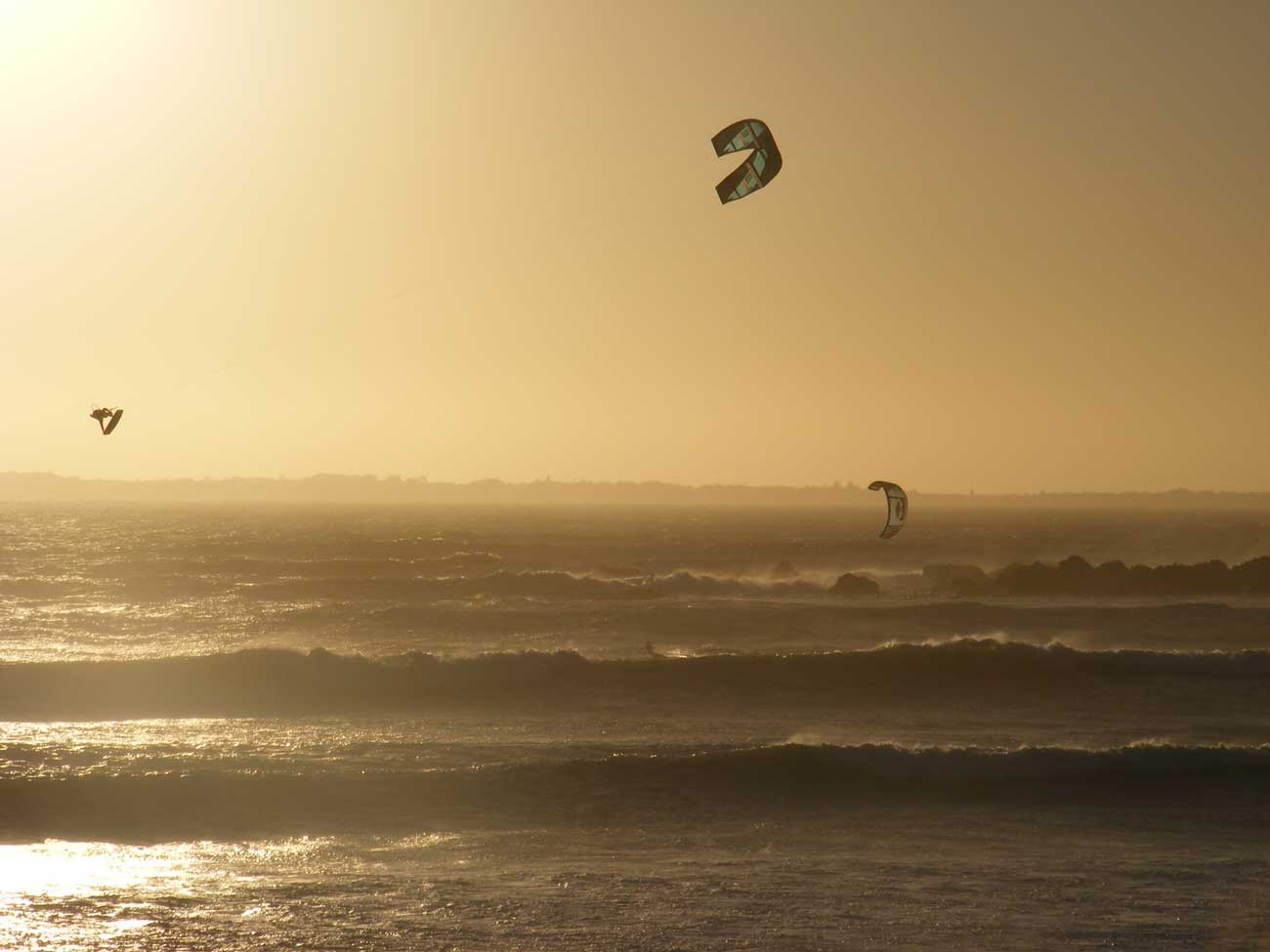 The prize giving was held just minutes after the final. Thousands upon thousands of people gathered in front of the podium, with Table Mountain as the backdrop.  To no surprise, Kevin Langeree won the Mystic most extreme move of the day. He was clearly the crowd’s favourite, because as soon as he was announced in third place, they started to boo and complain. In a moment of absolute tension, we had to wait to see who would come first, Aaron or Jesse. Suddenly Aaron’s hand was raised, announcing him the winner and chaos in the form of cheers and camera flashes filled the beach. 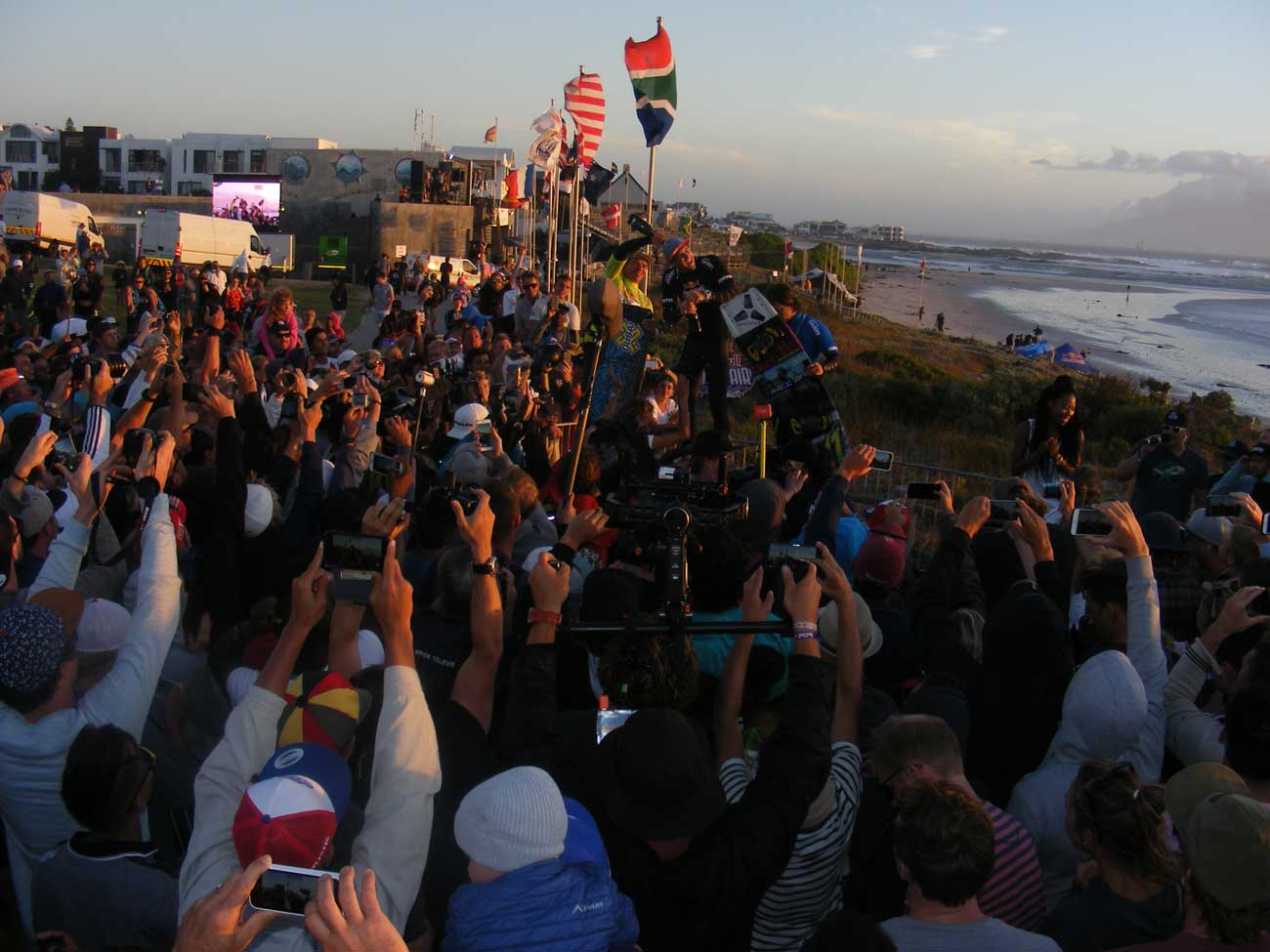 While the podium positions lapped up their victory, we spoke to some of the other riders and asked them how the event went for them and what they thought of the final results:

Oswald Smith: We had a really great day here today, the wind was perfect, the waves were really big, we had some sick kickers and everyone rode super well. The level was higher than ever before. Unfortunately I bummed out of my quarter finals, I got a few sick loops and then I tried some handle passes but didn’t really stick it so I didn’t get my third trick down. But the finals were insane, we had Aaron doing some KGB kiteloop passes which was crazy and then we got Jesse doing a kiteloop front mobe. I’m pretty stoked, it was an awesome event – best King of the Air yet! The judging was pretty good, Aaron deserves the first place and I know that Jesse definitely competed very hard, and then in third place it was Kevin who also did really well.

Andries: I’m happy, I’m stoked with my achievement. I will be doing it again next year, since I was in the top 12 I automatically go through. (Andries made it through to the semi-finals) The final results, I wasn’t too convinced about the first, second and third results. I think Kevin needed to win since he won the best move of the day during the final heat, but I also think Jesse did do really well so it’s hard to say.

In rare moments this, everything falls into place. A moment where the pressure mounts and the riders push the limits. The world comes out to support a cause and unity abounds. The elements fall into place too, and show off what they can provide. And that rare moment, is called Red Bull King of the Air.

Well done to every single rider for going out there and giving it their all. Well done to Aaron for winning, the first rider to win the King of the Air twice! Once again, he has made history. I guess Red Bull really does give you wings. While we wait to hear about Lewis Crathern, our thoughts go out to his friends and family. Our thoughts also go out to Ruben, we wish him well and hope to see him back on the water again soon.